For information on how to contact us for technical support, please see Support.

For all enquiries concerning the commercial versions of Saxon, please email .

Since the Saxonica team are currently working from home, the office phone number is not currently available. Please contact us by email instead. 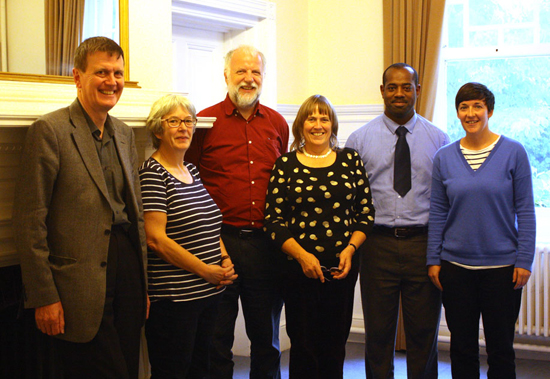 From left to right:

Michael Kay is the original developer of Saxon. He founded Saxonica in 2004. His knowledge of XSLT and XQuery is second to none: he was the editor of the specifications for XSLT 2.0 and 3.0, and XPath 3.1 Functions and Operators; a joint editor of XPath 2.0 and XPath 3.0; and an invited expert on the W3C XQuery Working Group. He is also the author of the best-selling XSLT Programmer's Reference from Wrox Press, currently in its fourth edition.

Michael has over forty years' experience in the software industry. He gained a PhD at the University of Cambridge for research on database management technology, and then joined ICL, where he led design teams for a number of software products including several generations of database systems: his technical contributions were recognised by appointment as an ICL Fellow. During that time, ICL evolved from a mainframe computer manufacturer to a $4bn software and services company, and became part of Fujitsu. As well as managing Saxonica, Michael remains the lead designer and developer of the software.

Penny Kay is a founding Director of Saxonica and the Company Secretary. Penny handles banking, tax, insurance, legal and personnel matters for the company. Previously Penny was a Civil Servant in the British Civil Service.

O'Neil Delpratt joined Saxonica from a research project at the University of Leicester in 2010. He is a co-developer of the Saxon product, with specific responsibility for Saxon on .NET, and the C/C++, PHP and Python product Saxon/C.

Before joining Saxonica, he completed his post-graduate studies at the University of Leicester. His thesis title was âIn-memory Representations of XML documentsâ, which coincided with a C++ software development of a memory efficient DOM implementation, called Succinct DOM.

O'Neil regularly publishes and presents papers at various XML conferences, and was an invited expert on the W3C XQuery Working Group.

Sue Schreiber joined Saxonica in 2010, and retired in 2020. Having spent the majority of her career at ICL (now part of the Fujitsu Group), Sue worked as Saxonica's commercial manager dealing with Saxonica's clients and contracts.

John Lumley joined the Saxonica development team in 2013, and retired in 2020. John spent most of his career at the HP Research Labs in Bristol UK, working mostly in the field of Software Engineering; he subsequently took his PhD at Nottingham University.

John completed a number of specific projects for Saxonica including implementation of the EXPath library, tools for streamability analysis, and research into algorithms for optimized matching of template rules. He also implemented the XPath parser for Saxon-JS, and was responsible for a number of key developments for Saxon-JS 2.0, including integrating the XSLT compiler written in XSLT itself, and developing the W3C test suite test driver for Saxon-JS which runs in the browser and on Node.js.

Debbie Lockett joined the Saxonica development team in 2014 following post-doctoral research in Mathematics at the University of Leeds. She has worked on performance benchmarking, the implementation of XQuery 3.1 features, and on developing the tools for creating Saxonica's product documentation and website.

Debbie has worked on Saxon-JS since its inception in 2016, and is now the lead developer. Activities include: performance improvements, increasing the test coverage, extending the XSLT conformance and IXSL capabilities (for instance implementing the serializer, and developing the HTTP client), and maintaining the documentation (and its Saxon-JS application).

Norm Tovey-Walsh joined Saxonica from MarkLogic in 2020. Norm has had a high profile in the XML community for many years (and SGML before that). He's best known for his work on DocBook and XProc, but has also been active in a number of other areas including long-term membership of the XSL working group (he was editor of the XDM specification), the XML Core Working Group, the W3C Technical Architecture Group, the initial specification work on JAXP, the Oasis/Apache catalog resolver, and specifications such as XML Base.

Norm is a co-chair of the Balisage conference committee, and runs the demo jams at various XML conferences. He is also a founder of Markup Declaration.

Ankita Mohinta joined the team in 2020 as Marketing and Commercial manager, and deals with Saxonica's clients and contracts. Ankita graduated with a Bachelor's degree in Commerce (Honours) from Xavier's College, India, and Master's degree in Advertising and Marketing from Leeds University (2011). She has previously worked on marketing strategy for several projects in the manufacturing industry, and on changing technology trends for a popular online magazine in India.